Since I moved to St. Louis (nearly two years ago – wow) there is one habit that I have picked up: buying in bulk. In New York you have to only buy the exact amount of stuff you need at any given time because you have no place to store anything in your tiny 400 square foot walkup apartment. Now I have an actual storage unit in the hallway outside of my loft … and I also have a Costco card.

As a result I now have a decade’s supply of toilet paper, coffee filters, red plastic cups and all manner of other consumables that I’ve been able to buy in large quantities. I buy from my local stores whenever I can, but sometimes the cost savings of bulk purchases are just too tempting.

On my latest trip to Costco I picked up a metric ton on quinoa, and so for the last couple of days I’ve been making a lot of it. And a little dry quinoa goes a long way, lemme tell you. Both of the dishes I made used just two cups of dried quinoa, which barely made a dent in my giant bag. Suffice it to say I’m all set on quinoa for the foreseeable future.

I put out a query on twitter for some good quinoa recipes and got a lot of responses. Several people pointed out recipes on 101 Cookbooks and I found that Heidi’s got a whole treasure trove of quinoa recipes that look awesome. I also found that two of her recipes called for ingredients that I had leftover in the fridge from a personal project I worked on at the end of last week (more on that project later when it’s done). So not only was I able to start using my quinoa right away but I was able to use a whole lotta stuff from the fridge that might otherwise have gone bad. Win!

Since I cribbed the recipes almost identically from 101 Cookbooks, I won’t bore you with repeating the recipes here. Go check out the originals and see all of the other good stuff she’s got going on over on her blog.

The Baked Quinoa Patties (recipe here) are simply amazing. They are packed full of flavor, and they are great at room temperature. I substituted goat cheese for the feta, and as a result I should have added a little more salt but otherwiseI ended up taking them to a baseball game last night and they were perfect for that. Wanna see some weird reactions from people at a ballgame? Bring out some quinoa. Seriously, everyone was like, dude, what the hell are you eating. It’s quinoa bitches and it’s delicious! I have to say that I was the only person in Busch Stadium eating baked quinoa patties with dill and goat cheese. Trust. 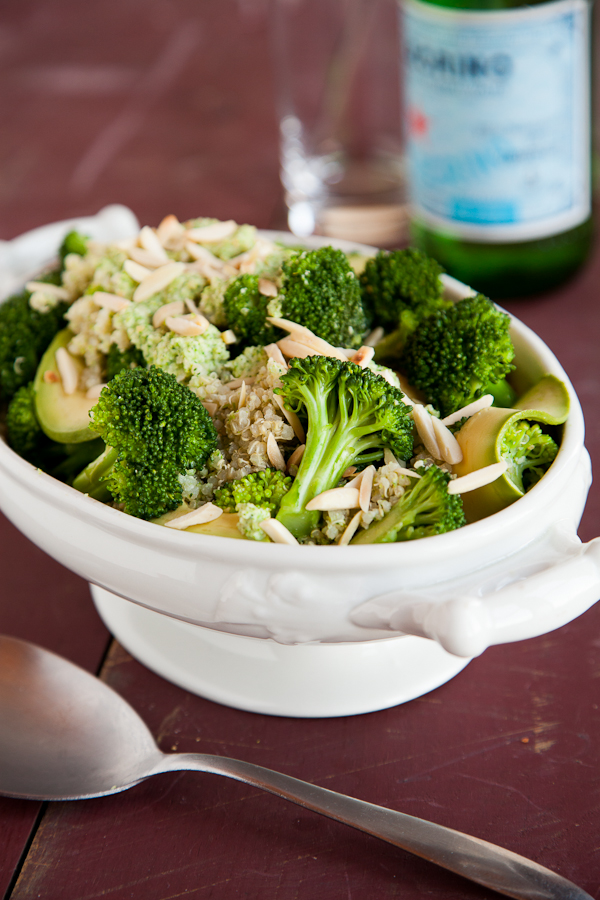 The Broccoli Pesto Quinoa (recipe here) was also delicious and was perfect after it was chilled for the hot and humid weather we’ve been having here in St. Louis over the past few days. A couple of notes though: make sure to include the avocado – it would be kinda bland otherwise. And as with any other pesto, make sure to use fresh garlic. Older garlic can make the pesto bitter.

In addition to the quinoa I also picked up a giant bag of couscous, so you can bet I’ll be makin’ a whole lotta salads this summer.