Tip for cooking with fresh coconut: when the internet says that you should be able to hear the coconut milk sloshing around inside of a mature coconut, you should listen to the internet. Otherwise you will spend ten bucks on a bunch of dried up and worthless coconuts from your local grocery, and have to spend an extra hour running out to Whole Paycheck to spend another ten bucks on heavy-sloshy-sound coconuts.

That said, once you get a good coconut it is pretty damn awesome smashing them open with the back of your favorite cleaver. Boom. Although if you want to reserve the coconut juice you should drain the thing first, or, you can smash it open spraying the juice everywhere, Bobby Flay style.

Of course, after you’ve smashed the coconut open you still need to pry out all of the meat and either grate it or chop it up in a food processor. This can be tedious, although I think the fresh coconut adds a lot to a recipe. This one, Chicken in Sweet-and-Sour Coconut Sauce, is the next recipe in my October 1976 Gourmet project. This one is actually a two-for-the-price-of-one: The chicken recipe and the recipe for grated fresh coconut (both on page 124 of the magazine). Win!

When you hear the phrase “sweet and sour” it brings up visions of bright red syrupy sauces and Chinese food, but that isn’t what this recipe is about. And despite the coconut it doesn’t have a tropical feel either. The recipe comes from an extensive article about Goa, which is located on the west side of India. And yet this dish doesn’t taste like the dishes I associate with Indian food either. It has a unique flavor, strong on the cloves, with a lot of nuance. Clearly this dish would fall into the “exotic” category in the United States in the 70s. And incidental to any taste profile, I am starting to find that these 1976 recipes actually taste dated, and I can’t exactly put my finger on why. Not enough salt perhaps (which seems counter-intuitive) or maybe it’s just that the flavors are more subtle and have less … bang.

In any case, this dish was quite tasty (and lately I have become a huge fan of chicken thighs). If anything I should have processed the coconut longer to make it smoother – my sweet-and-sour coconut sauce ended up being more like a salsa as a result.
[hr_padding]

When purchasing a fresh coconut, choose one that doesn’t have any cracks, is heavy for it’s size and has a very audible sloshing sound when shaken. Pierce the eyes of the coconut and drain the juice into a glass, reserving for another use. Smash the coconut open with the back of a cleaver or a hammer. I found that the coconuts at Whole Foods are pre-scored around the middle which helps to crack them open. Pry the coconut meat out of the shell using a strong paring knife. Remove the brown husk, then either grate the coconut with a fine grater or pulse it in a food processor. One coconut should yield about four cups, grated.
[hr_padding]

Pre-heat broiler on high. Spread one cup of coconut, the onions, garlic, ginger, cloves, chili pepper, cinnamon and saffron on a baking sheet. Place baking sheet under the broiler for 30 seconds – the spices will toast almost immediately, so watch carefully so they don’t burn. Cover the spices with some of the onions, then return to the broiler for several more minutes until the coconut starts to brown nicely. Cover the coconut with more onions, then broil again until the onions are soft and slightly brown. Transfer everything to a food processor, add 1 cup of water and the vinegar. Process until a smooth paste is formed, and reserve.

In a large skillet or dutch oven, heat 1/3 cup of olive oil. Salt and pepper the skinless chicken thighs, then saute them in the oil until browned on all sides. Don’t overcrowd the pan, do it in batches if necessary. Once the chicken is all browned, add the remaining cup of coconut, 1/2 cup of water, and 1 tsp of kosher salt. Bring the mixture to a boil, then reduce heat and simmer, covered for fifteen minutes. Add the reserved paste mixture and simmer for another five to ten minutes until the chicken is tender. Serve on a platter, garnished with fresh coconut and parsley.

Both recipes adapted from the October 1976 issue of Gourmet Magazine

Check out the other recipes that I’ve made from the October 1976 issue of Gourmet. 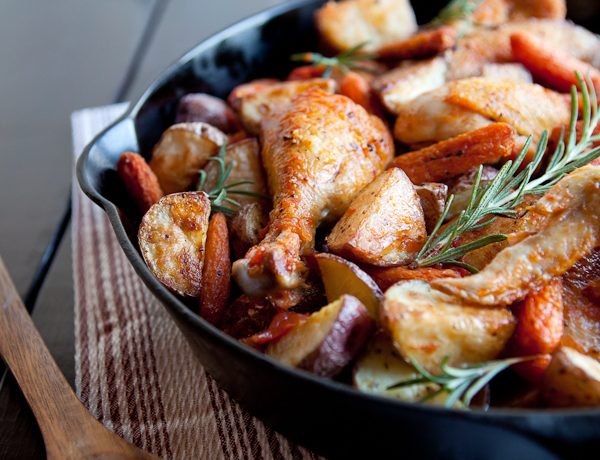