Ever since I started making the “five minute a day bread” back in the fall, I’ve been pretty much going through the motions. I tweaked the recipe a bit to a point where I can bake consistent and tasty bread with practically no effort. This is awesome, and has ruined me for most grocery-store-bakery breads and the idea of buying sliced bread in a plastic bag seems completely foreign to me. However, while this bread is convenient, tasty, and relatively healthy it does get a little boring. I don’t generally have time to try super long and/or complicated recipes, but since Dr. Fiance is away at a conference and I’m on my own this week I decided to take a shot at the low yeast, long fermentation, baked in a dutch oven method. 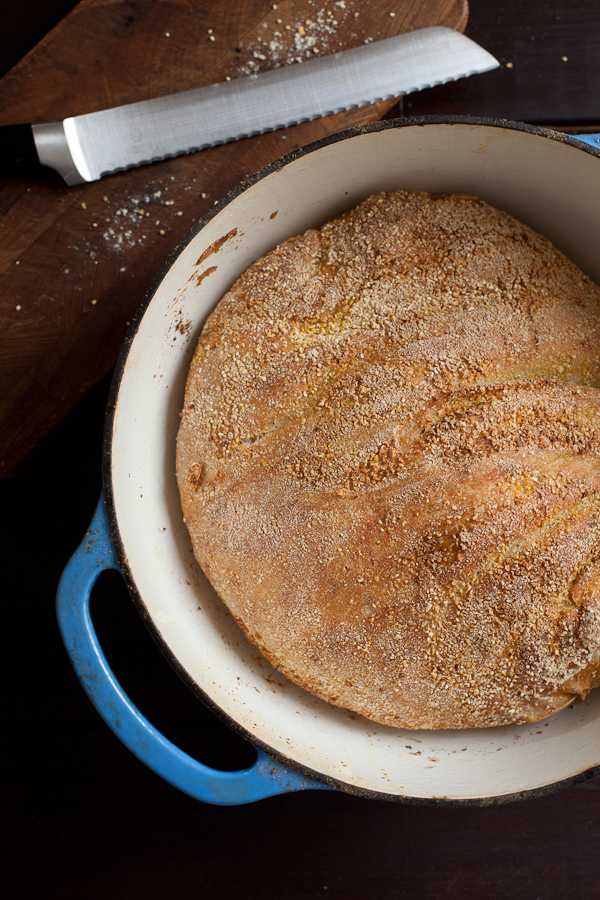 I could go into a long description of the method, theory and recipe but luckily for me Bittman has already done all of that. Check out the column in the New York times which will give you all of the particulars. The essentials of the method are as follows: a small amount yeast, a wet dough, and a long fermentation period prior to baking in an covered dutch oven. Instead of trying to rewrite that article I’m going to pass along a couple of notes on my first attempt which may come in handy.

First, I have active dry yeast rather than the called for instant yeast. So rather than mixing the yeast with the dried ingredients I dissolved it in the water before I mixed up the dough for fermentation. This may or may not have an effect on how much my dough rose. More importantly, I think I added too much water in the first place. The recipe calls for two cups, and it’s possible I added a little more than that through sloppy measurement practices. The result is that my dough was soupy rather than shaggy, as the recipe suggested.

This meant that after the fermentation, when I went to form it into a ball, the dough slid into more of a pancake. And the results were a very lovely tasting loaf shaped more like a flying saucer than a boule. I think that my yeast was fine, it was just that the dough was too wet to hold the required surface tension. As it is, there is only a scant half teaspoon of yeast for this recipe, which is a tiny amount compared to my every day bread. This recipe has four cups of flour for that half teaspoon, while my six cup batch of everyday bread takes one and a half tablespoons of yeast. 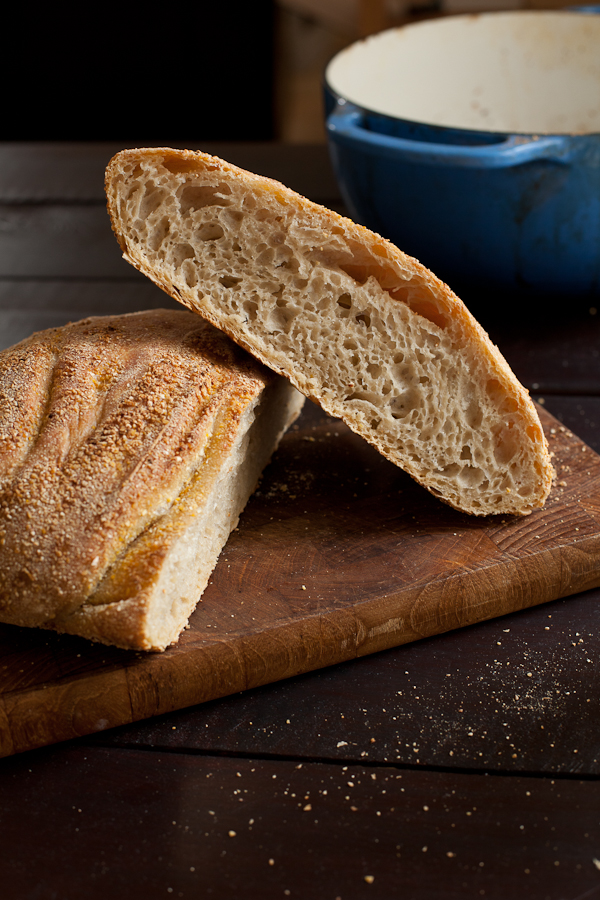 Which is better, fast method or slow method? To be fair, the flavor in the dutch oven bread is much richer than the everyday bread, but it did take 18 hours to ferment, followed by a couple of hours of additional rising. It is fussy. It doesn’t take a lot of skill or actual time, but you do kinda have to be around to take care of it to hit those time points. The good thing is that the crust is outstanding – crispy, thick, chewy, everything I would want good peasant bread crust to be. I think I could have even baked it longer and gone darker and crisper than I did. The crumb really is custardy and moist with beautiful air holes, which again, is everything I want from a crusty peasant bread.

Given the flatness and the super-wetness of the dough, I will definitely try it again to try to improve using less water. However, this recipe does make a huge loaf, and since I’m by myself this week and I’m not chopping down trees or running a marathon I’ll be good on bread for a few days.

Of Quinoa Pilaf and Pronunciation

Moving On, Moving Up