I’ve been vetting a membership to Cooks Illustrated online (one of those dreaded trial memberships) which is why a lot of my recipes recently have been based on their stuff. This week’s soup dish is another cold weather favorite of mine and of Dr. Fiance. I love French Onion Soup, but quite frankly I hardly ever order it when we’re out at a restaurant because in most instances the soup would be enough for a full meal, rather than just a starter. The one I made this week was no exception. It stood in for a weeknight entree and held it’s own against the five degree weather outside. I know I’m dwelling on the cold lately, but jeeze, it’s cold in St. Louis. Anyways, back to the soup.

Despite the fact that we loved this recipe, there is a reason that this it isn’t going to be on our table very often: It takes a FOREVER to make. And it takes a lot of vigilance. It’s the onions that take the time. A lot of time. In order to get the most flavor out of them you have to cook them down very slowly until they are caramelized into brown strips of mouthwatering onion crack. Seriously, if if you could smoke these onions I would. But in order to get your onions to this point you need to spend the better part of an hour next to the stove for near-constant stirring. If you have a stool and have a calm disposition you could sit next to the stove with a book and enjoy the wonderful aromas while giving your pot a stir every minute or so. Or if you’re like me you’ll pace around in circles worrying that you’re going to burn your onions for the whole time. 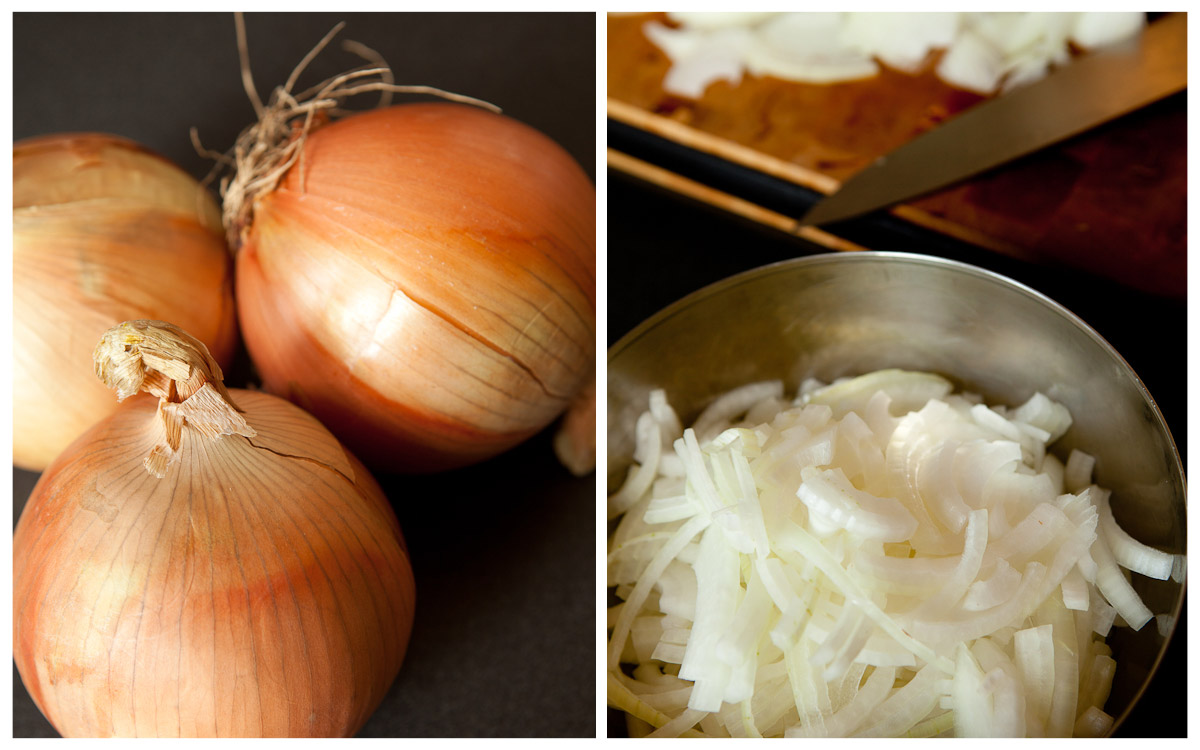 Despite my self-imposed rule about following recipes closely in order not to make too many rookie mistakes, I made some changes to the original recipe. The original recipe called for 8 cups of water, and my thinking was, why use water when I can use some of my awesome chicken stock? I bet beef stock would work well here as well. Also the original recipe was specific about using gruyere cheese. I used a fancy and pricey gruyere the first time I served it, and then used cheddar for the leftovers the next day. Both were excellent. Don’t let onion soup rule your cheese world is my outlook. Finally, the original recipe called for an added pinch of sugar. I found that the natural sugar in the onions was sweet enough without added sugar. 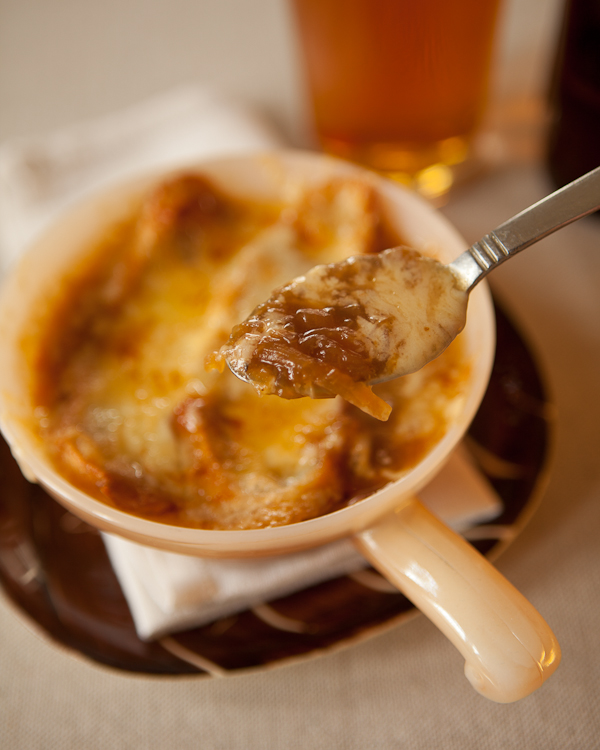 Chop the onions as follows: in half from stem to roots, then into quarters lengthwise, then chop each quarter into strips crosswise, about an 8th of inch thick. Melt your butter in a large dutch oven or other high edged pan over medium heat (you’ll need to use a pan with a lid). Once the butter is melted, add in the onions and the salt. Stir to coat all of the onion with melted butter, then cover the pan and allow the onions to steam for about ten minutes. Remove the lid and slowly cook the onions down, stirring frequently. This process could take from 30 to 90 minutes depending on how many onions you have an the specific heat of your burner.

The onions have quite a bit of moisture in them, and you are basically cooking all of this moisture away. Once most of the juice from the onions has evaporated, the onions will start to brown. At this stage, reduce the frequency of your stirring to five minute intervals to allow the onions to brown on the bottom of the pan. You don’t want the onions to dry out, so periodically add a couple tablespoons of water to the pan, which will deglaze the brown goodness on the bottom of the pan. Don’t rush this step by turning up the heat or you’ll cook the onions to fast. You want soft caramelized onions, rather than crispy fried onions. Keep stirring and adding a little bit of water until all of the onions are an even, dark brown color. This could take another half hour to 45 minutes.

Add in the flour and cook for a couple of minutes, then add in your stock and the thyme. Bring your soup to a boil, then reduce the heat and simmer for 20 minutes or so. If you’re using water instead of stock you may want to simmer a little longer to allow the flavor to intensify a little bit. Add in the wine and then simmer for another ten minutes or so, stirring occasionally. At this stage you can add salt and pepper to taste.

After you’ve added the stock and the wine, the soup doesn’t require as much close attention and can simmer on it’s own with only the occasional stir. Use this time to prepare your bowls and bread for serving. Cut your baguette on an angle to create slices (two per serving) of bread that fit nicely across your soup crock (or other oven-proof bowl). You can either toast the pieces in a traditional toaster or on a baking sheet in the oven. Toast the bread until it is crisp and firm (in order to hold it’s own floating on the soup).

When you are ready to serve, fill your soup bowls with soup, float two slices of bread per bowl, then cover generously with the grated cheese. Quickly transfer the bowls to the oven under the broiler until the cheese is melted, golden and bubbly. You have to move quickly so that the cheese melts and forms a cap over the soup before it sinks. A baking sheet helps to make transferring the bowls to and from the oven. Serve immediately (warning your guests that the bowls will be very hot). 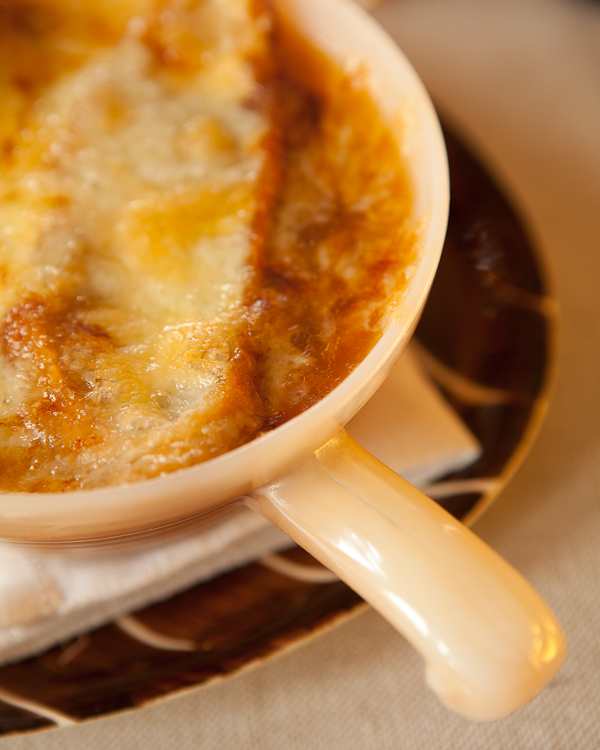 For cold weather food, it doesn’t get any better than this. French onion soup and a glass of beer? Love it. While it did take a very long time to make, it was worth it. Next time I’m going to use beef stock and see if I can make it even richer, and tone down on the sweetness of the onions a bit. Maybe it would be fun to try a variety of onions (on recipe I saw called for vidalia onions). This soup was easy to store in the fridge and reheat the next day, so if you’re a two-person household or on your own this recipe can last you several meals. 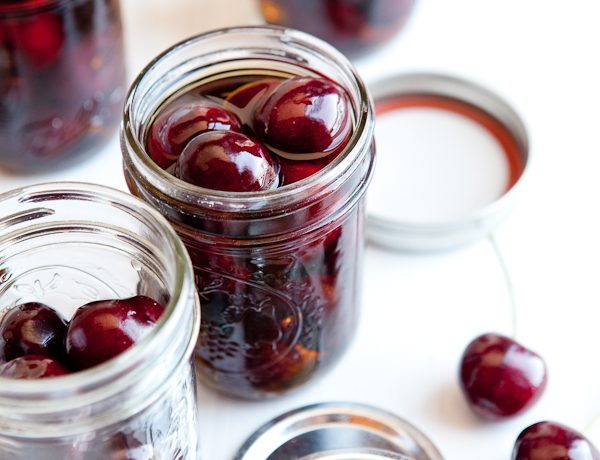