Dr. Fiance and I were out to dinner with her colleagues the other night and we got onto the subject of rice as a side dish. We all pretty much agreed that the choice of side dish at a restaurant plays as big a part in our choices as the entree, and for the most part we all said that we would choose something else if rice was the chosen accompaniment. Potatoes in almost any form? Yes please. Rice? Only if it’s risotto.

I love risotto. It’s creamy and starchy and when done properly can be packed full of flavor. It is a great blank slate, works well with mushrooms, seafood, pretty much anything. Even gorgonzola, peas and bacon! 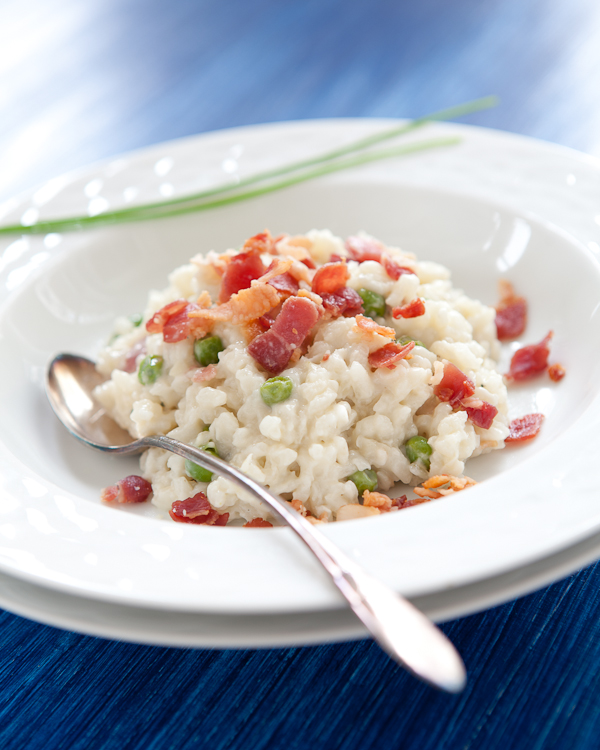 I have been wanting to make risotto again for several months. My first attempt at it in the winter was ok, but not noteworthy enough to talk about. I think I rushed it, that first time around, and the rice was a bit chewy. Instead of creamy it was tough. That was a simple no frills basic risotto too, that blank slate that I talked about. I have been drooling over a recipe I found over at Pictures and Pancakes so I decided to do something similar. However, their recipe calls for a lot of cheese and cream. I think that works for a side dish, but since I was planning on serving it as a main course, I felt it needed to be a little lighter. I cut the amount of cheese from 8oz to 4oz, for starters. Even with half of the cheese from the original recipe the risotto was still very rich, so I left out the cream as well. Then, in order to cut the richness of the gorgonzola I added in frozen peas, which also served the purpose of making the dish a little more colorful.

Finally, I had some leftover bacon from the weekend so I decided to add that in. I chopped it into smallish pieces and panfried it. Note: the bacon I was using was very thin and delicate. With thick bacon you’ll get lardons rather than small flaky bits of bacon, so you’ll want to chop thick bacon a bit smaller.

The other thing that I did differently this time around was to use a medium-sized pan instead of a large dutch oven. The smaller pan made the liquid evaporate slower and gave the rice more time to absorb the moisture.

Place bacon in a cold, medium sized frying pan. Turn on heat to medium, then cook, stirring frequently, until bacon is crispy. Slow and lower temperature works best for this rather than hot and fast. Transfer bacon to a bowl lined with paper towel to drain off the fat.

In a medium sized saucepan, heat the olive oil over medium high heat, then add in the onion. Cook until translucent, 5-8 minutes. Add in the garlic and cook for two more minutes, stirring frequently. Add in the rice and stir for one minute until rice is glossy and coated with oil. Add one cup of stock and stir constantly until all of the liquid has been absorbed into the rice. Add the remaining stock, a half cup at a time until the rice is tender. Stir constantly so the rice doesn’t stick to the bottom of the pan. If you run out of stock before the rice is tender, you can substitute the stock with water or a small amount of white wine.

Once the rice is tender, stir in the gorgonzola and the peas. Continue to stir until the cheese is melted and the peas are hot. Add in 3/4 of your cooked bacon. Stir until combined, add salt and pepper to taste. and then serve immediately. Top with reserved bacon. 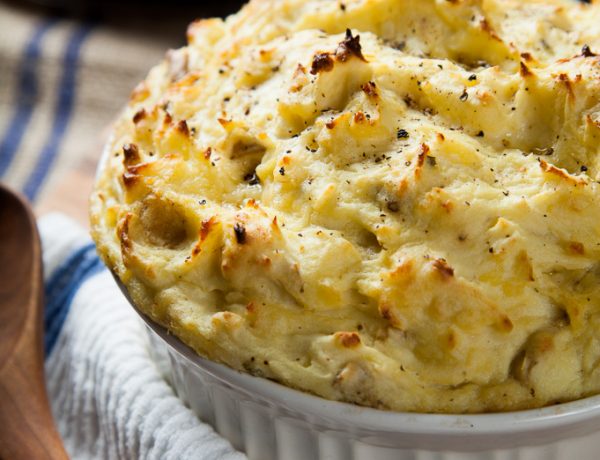