I think that the thing about learning how to cook that is most interesting to me is my continued surprise when I make something delicious. I suppose that this stems from the fact that I’ve always made mediocre food a home, depending on others for most of my meals. Mainly restaurants. It doesn’t help that ten years in NYC meant that it was usually cheaper to eat out anyway than to buy the ingredients for a single dish. This comic by The Oatmeal pretty much sums that up: Why I Don’t Cook At Home

Growing up I was lucky enough to have a mother who generally fed us things that were tasty, healthy and well prepared (with the possible exception of a red curry soup that mom made once when we were tweens that put me and my sister off curry for a decade or more). But growing up I occasionally ate outside the home and there are a number of dishes that were almost always badly prepared. This was true when eating over at friends houses and even out at restaurants. Hockey puck pork chops come to mind. Tough, grey, overly sauced beef dishes. Dry, tasteless roast chicken.

Of course, these days despite my alacrity in the kitchen not all of my cooking is successful. I was emailing with a friend back in New York who told me that it may be a good idea to talk about my failures in the kitchen as a contrast to my successes to add some depth to the blog. My decision to cook a whole chicken for dinner seemed like the perfect opportunity to show such a failure. 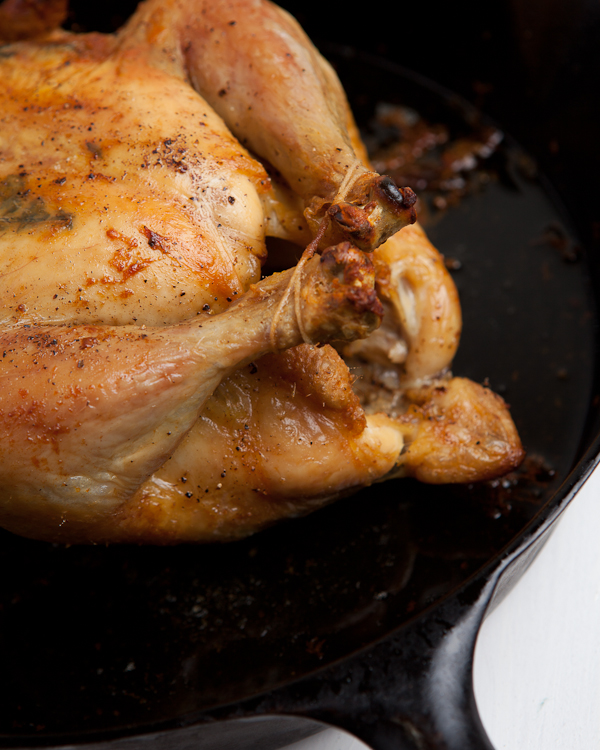 But I failed at failing.

No kidding, this is the roast chicken to end all roast chickens. I find it difficult to properly explain the joy and excitement I had when we cut into this baby and realized it didn’t suck. Crisp and tasty skin, moist and flavorful meat (both dark and white meat) and all without basting or marinating. Here are a few of things which really blew my mind:

The recipe that I used is based on the Zuni Cafe recipe which goes with a bread salad (which I didn’t do this time around). It is apparently a very popular recipe (just do a search for zuni+roast+chicken to see the rave reviews). And you know what? The reviews are all true. This is the most easy, makes-you-feel-like-a-cooking-rockstore recipe ever. The key is the pre-treatment of bird 24 hours in advance. I don’t know from brining, but apparently the salt treatment the day before accounts for the moisture in the roasted bird. 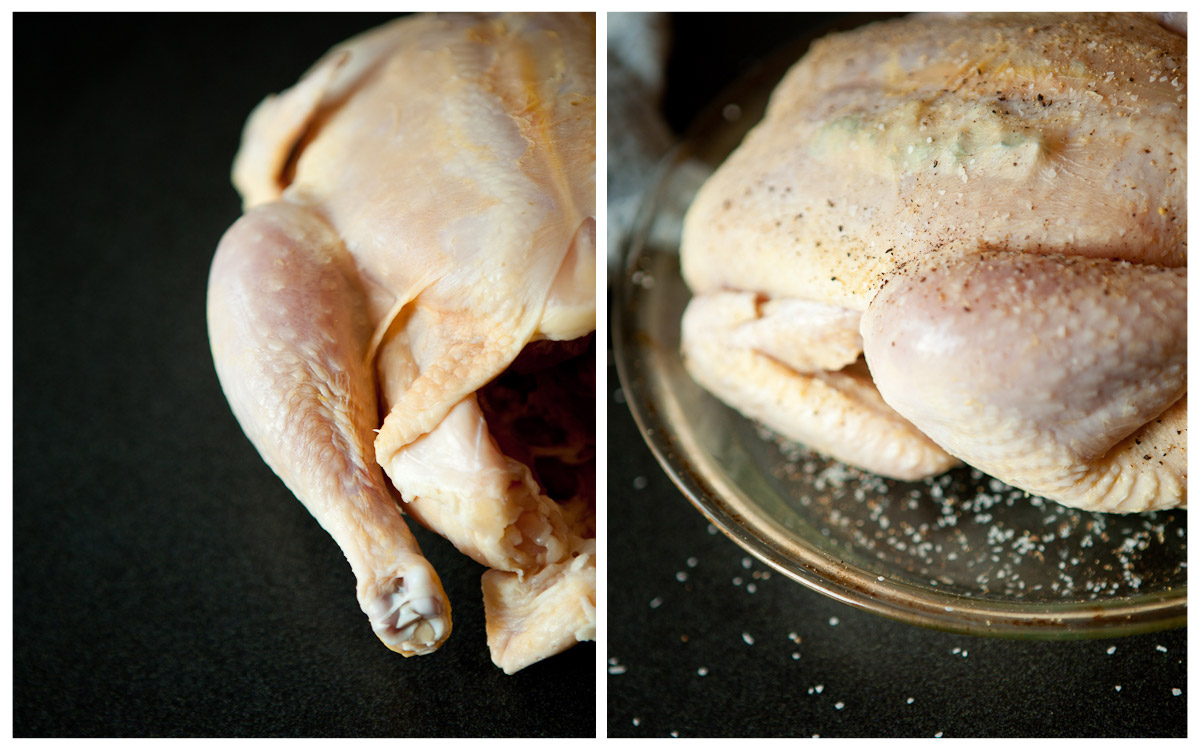 Remove the packet of spare parts from the interior of the chicken (put them in the freezer and save them for stock). Rinse your bird briefly and dry carefully. Excess water will cause the bird to steam rather than brown and crisp nicely. Starting at the cavity behind the legs slide a finger up under the skin over the breasts and thighs, and shove a sprig of your herb of choice between the skin and the flesh. Apply salt and pepper liberally over the whole bird and the interior cavity. At this stage you can choose to tie the legs (or not). Cover with plastic and put in the fridge for at least 24 hours.

When you’re ready to cook: preheat the oven to 475. Give it plenty of time to heat up. Put your skillet in the oven about ten minutes before you’re ready to start cooking to preheat. Once the skillet is hot, place your bird in the pan, breast up (it should immediately start to sizzle). Put the skillet in the oven and bake for approximately 30 minutes. The top should start to brown by 15-20 minutes in. If not, increase your heat by 25 degrees. If it starts to burn, lower the heat slightly. After 30 minutes, flip the bird over. I used kitchen tongs right into the cavity for a good grip. Bake for another 20-25 minutes, then flip back over. Another 10 minutes on it’s back should finish it up and put the final crisping on the skin. The internal temperature should be at least 165 degrees.

Remove the skillet from the oven and move the chicken to a warm plate to rest. Tent with foil to keep the heat in (don’t cover too tightly though or the steam will make the crisp skin go soft).

Optional: Put the skillet on a medium-high burner with the leftover fat and all the bits that fell off the chicken. Once the chicken fat is bubbling, deglaze the pan with some chicken stock, white wine, or even water. Guestimate the amount. Thicken with some flour and reduce, stirring with the back of a spoon to remove any lumps. This makes a nice gravy, although your chicken won’t need it since it will be moist and lovely. Great topping for a side dish like potatoes or roasted veggies.

I love the fact that there is no added fat in this recipe. The natural fat in the skin of the bird takes care of everything. There was even enough extra fat in the pan after the bird was cooked to make a very nice gravy – a skill I was shown once my by grandmother before she passed away which I am struggling to perfect. I’ll write a post on her technique when I get good at it.

I should have done some research on how to carve a chicken. I kind of butchered it. Ha ha. Seriously, I did a terrible job cutting it up. Hence the lack of photos of the chicken plated. Although to be honest, after I cut off the breasts and legs, Dr. Fiance and I just used our fingers to eat everything else – the meat just fell off the bone anyway. Don’t judge us for using our fingers – no one else was watching.

Will I make this again? You betcha. 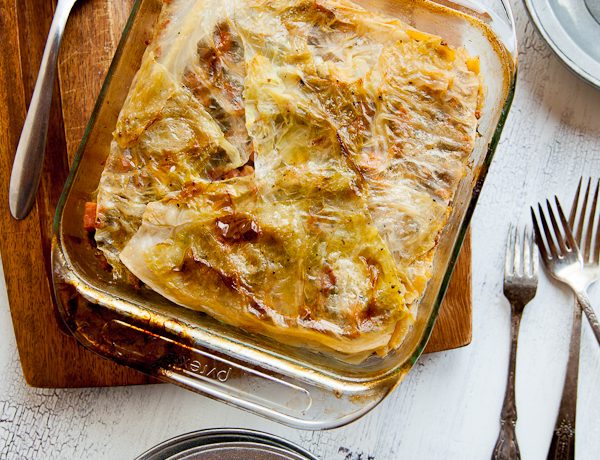 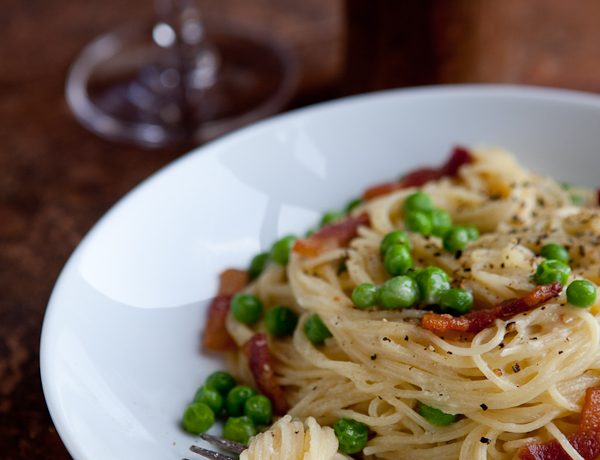