National Mango Board Event at Monarch 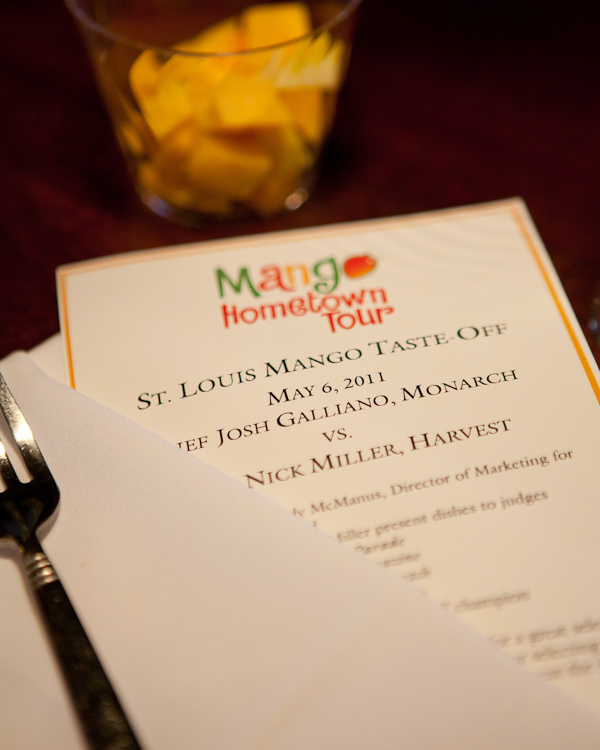 The event that I was invited to took place at Monarch in Maplewood. I’d never been to Monarch and was pretty impressed with the space. The nondescript exterior hides a warm and comfortable interior. In particular I liked the back dining room, which features an array of monarchs floating around the ceiling. 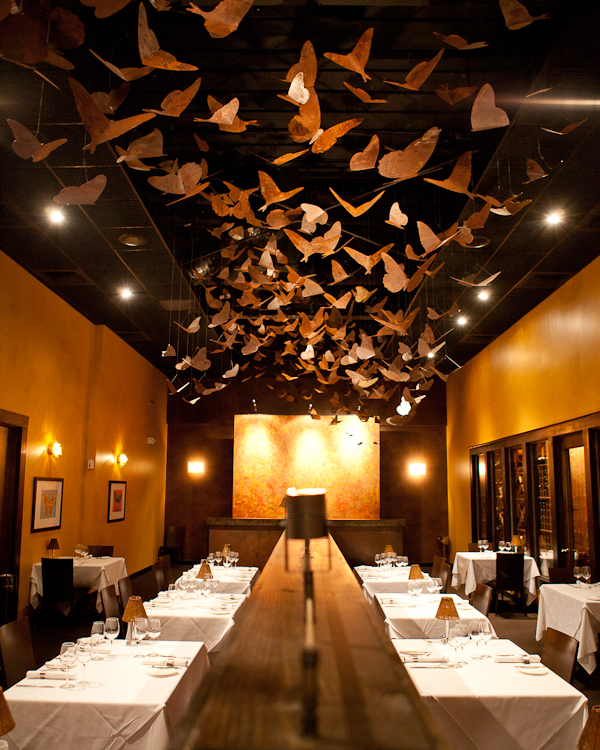 As a way to create mango awareness, the Mango Board set up a little contest between Chef Josh Galliano of Monarch and Chef Nick Miller of Harvest. The idea was for each of them to create a dish featuring the fresh mangos that are in season at the moment. Their dishes were judged by Alanna Kellogg of Kitchen Parade, Katie O’Connor of Sauce Magazine, and Evan Benn of the St. Louis Post Dispatch. In addition to the food that we got to sample we were also taught the appropriate way to cut a mango without slicing off our fingers – which is good because I can’t remember the last time that I ate, let alone cut up a mango on my own.

The food that the chefs prepared was mighty tasty. After a coin toss, Chef Miller served first. His dish was a Red Wattle Pork Trio. He was clearly playing to people like me because he included a nice big chunk of pork belly. I would have handed him the win without even trying the other dishes. PORK BELLY! 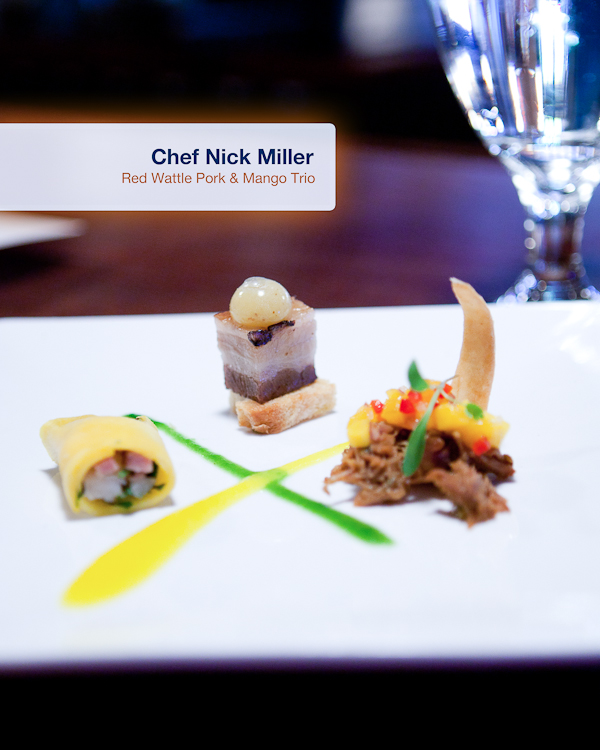 Chef Galliano followed up with a shrimp chorizo which was outstanding (and apparently the judges thought so too). What’s not to love about sausage made from shrimp? The mango tuille (in other words, a home-made fruit-rollup) was a nice touch as well. His creation was the one that the judges ultimately awarded first place to. 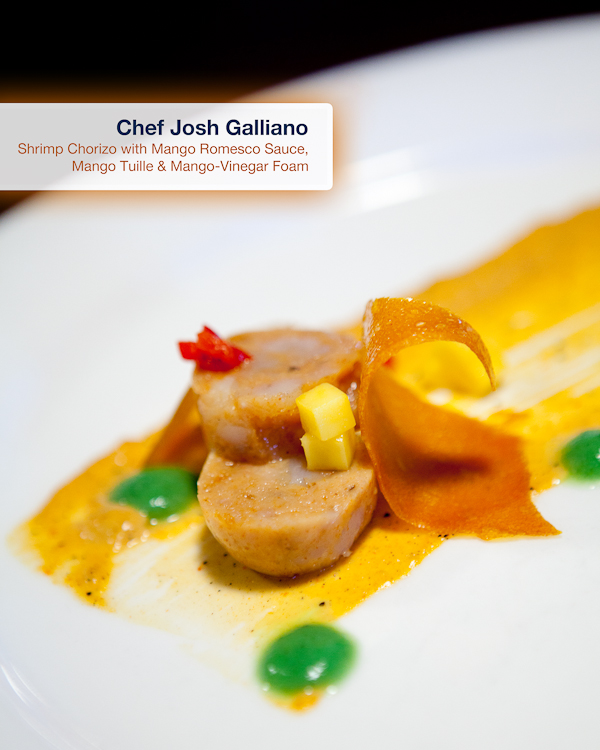 One of the best parts of the event was watching all three of the judges whip out their cell phones to photograph and live tweet each plate of food as it arrived. Knowing that the judges were tweeting made me want to tweet-heckle them from the audience, but my better judgement prevailed. 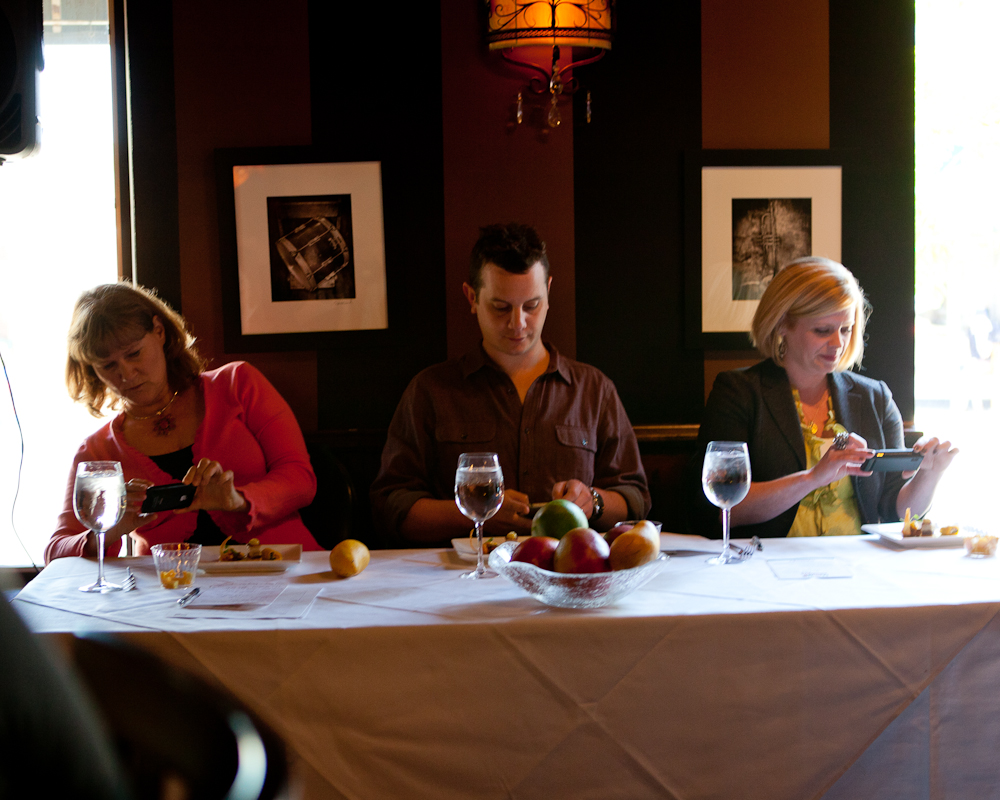 I’ll be perfectly honest, I feel like both dishes could have used a bit more mango flavor, considering that this was a mango-tastic event. I’m sure that on Iron Chef both would have been dinged a few points for straying away from the main ingredient flavor. That said though, I really liked both presentations. I can easily see how the judges preferred the shrimp chorizo, but I imagine with was a tough decision. The other thing, which should be noted is that Chef Galliano, Chef Miller and their staff needed to roll out 100+ plates all at the same time (it was a full house at Monarch for the taste-off). No doubt the necessity to plate so many dishes at once banquet style had an effect on the choice for each dish.

I also was digging the White v. Black outfit choices of the two chefs. 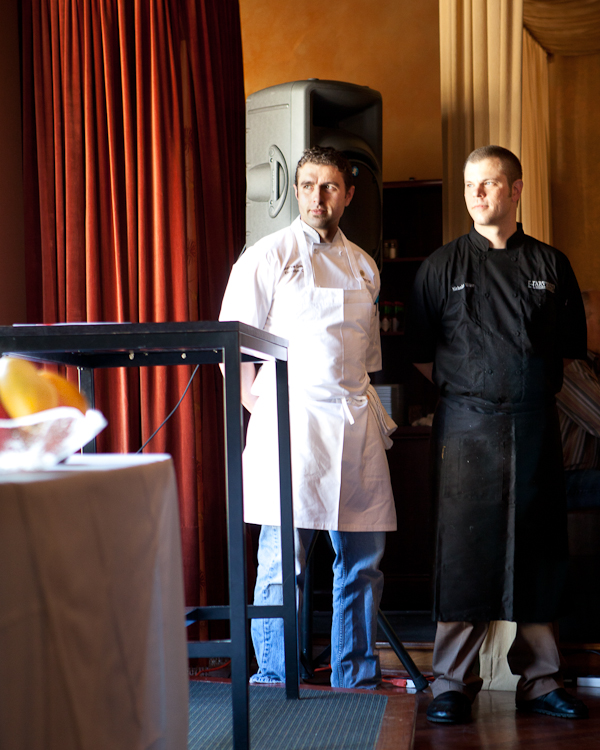 It was a fun event to go to, and like all St. Louis happenings I certainly enjoyed running in to so many people in person that I previously had known exclusively from Twitter and to meet up with friends made at other such events. I think I say it every time, but events like these are what make St. Louis so friendly and accessible, one of the reasons I’m happy to live here. Lots of fun was had by all. 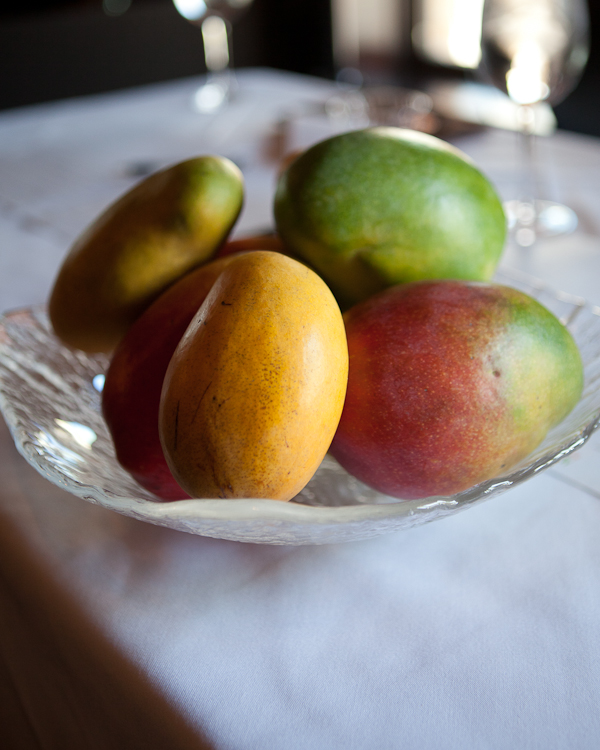 Shameless commercialism: At the event I got a lot of compliments about the Shoot First, Eat Later shirt that I designed – if you’re interested in picking one up for yourself you can order them over at my Spreadshirt Store. There are couple different designs, and a lot of colors and styles. They’d make excellent belated Mother’s Day gifts! 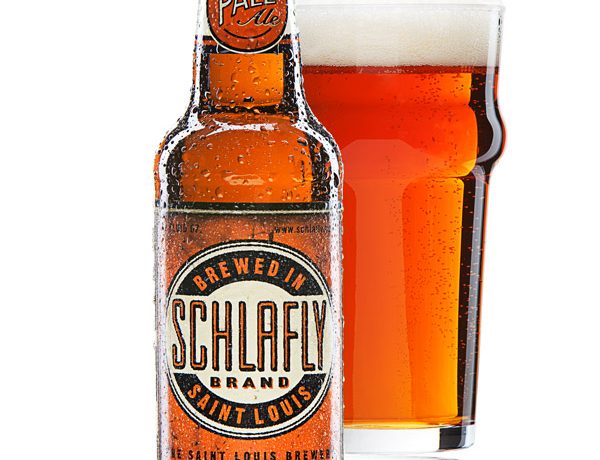