A while back when I started making bread at home I raised the question about whether the quick and dirty method of making bread was a viable option or if it was just an easy way out of the problem. The quick and dirty method that I’m referring to is, of course, the five minute a day method which involves a high dose of yeast, which means quick rising, easy to make bread. It is practically fool-proof as evidenced by this guy here who has made it virtually without fail every other day for the last few months. Of course, I can’t leave well enough alone so I have started to experiment with more “traditional” baking methods. 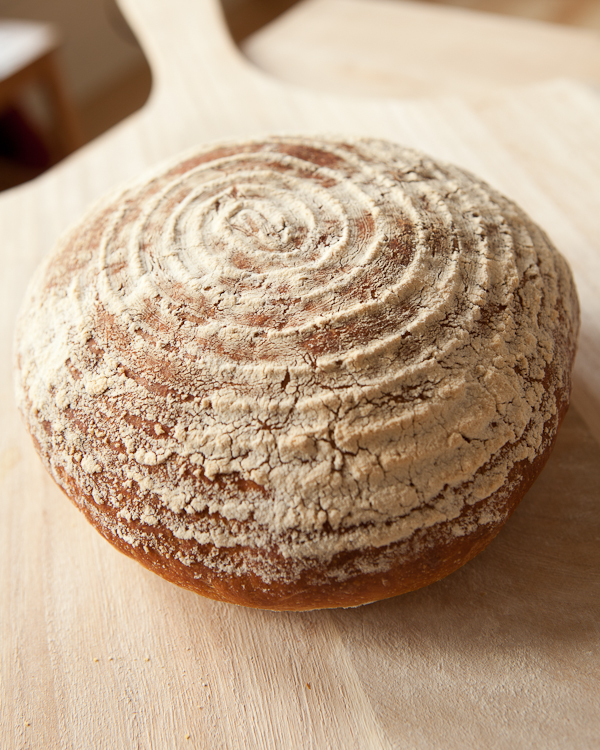 Now I dare you to say this isn’t the coolest, most artisanal looking loaf that I have made yet. Looks like it should be in a stall at the farmers market. This is my first attempt at the long, slow and cold fermentation method which is pretty much the exact opposite of the five minutes version. Instead of using a lot of yeast, this method calls for less yeast, and a longer rising period in the fridge, versus a short period at room temperature. The idea is that the yeast has to work harder to leaven the bread, which adds more flavor.

My first batch of dough yielded a loaf of bread that is quite similar to the bread that I have been making using the quick method. Even though I’m using the same flour for both methods, there is a distinct taste difference. It’s hard to put my finger on, but they do taste different. Both are good, but I can’t say that I am overwhelmed with the difference between the two. The crumb on this latest loaf is very much like the fast method loaves – uniform and dense, where it was supposed to be filled with large uneven holes. 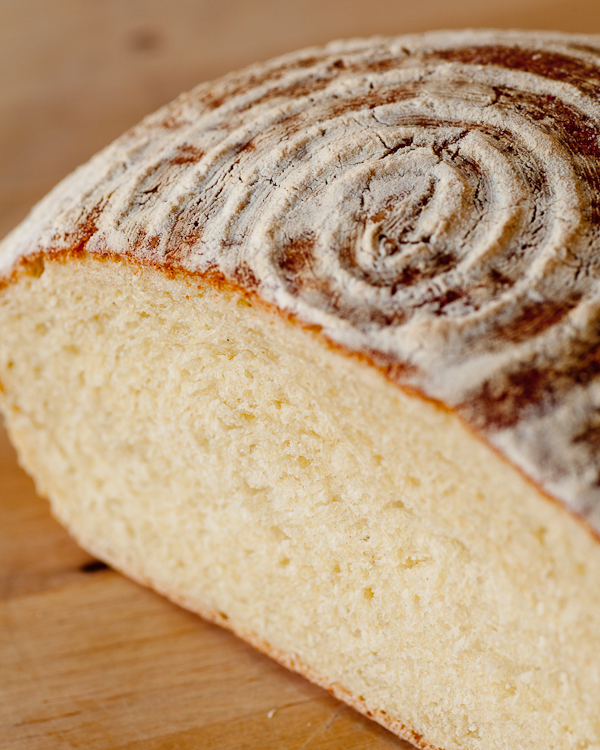 I will not be deterred though, and this exercise is not without merit. I made some mistakes making this batch that I can learn from. For example, I skipped (what may be) a crucial resting period during the initial dough making. Another thing I did was forget to slash the loaf prior to baking, which certainly doesn’t help with the density. And finally, I’ve realized that my apartment (or St. Louis in general) must have a much lower humidity level than the other places where these recipes are developed. I have noticed that most of my baking recipes are dry or require more water than called for. For this recipe I used only the prescribed amount and I think it was too little. The long fermentation is supposed to have more water, which also helps it puff up in the oven. I think I just didn’t put enough in. There is a whole “tacky” versus “sticky” thing that I think I’m not hitting just right.

So. More on the actual method and recipe once I have a product that wows me a little more. Onward and upward, the bread adventure continues!