Here’s something I noticed about all of this cold weather: if I have enough staples in the apartment then I don’t have to go outside at all. I realize that this doesn’t seem like it should be a new concept for me, but cut me a little slack. I’m still recovering from living in a city where apartments have barely enough storage space for your booze, let alone extra food. In our New York apartments you would have been hard pressed to find anything but a couple of boxes of dried pasta and several varieties of Irish whiskey.

These days, however, I actually have more kitchen cupboards than I know what to do with. Even with my growing collection of prop dishes I still have space for, dare I say it, a pantry! So I’ve gotten into the habit of stocking up on the essentials like flour, beans, rice, canned goods, Irish whiskey …

The other thing that I have routinely stocked up on is baking supplies, obviously. In addition to my standard five minute bread I’ve been making all sorts of different types of breads for sandwiches and special events. For example, one of our neighbors has been hosting dinner once a week, and I’ve fallen into the habit of bringing bread along. And to keep it interesting, I’ve been trying to bring something new each week. When deciding what to make for this week’s dinner, I thought I’d go with a dinner roll rather than loaf bread. The obvious choice was a family favorite that my dad makes all of the time: Edna Byler’s Potato Rolls. 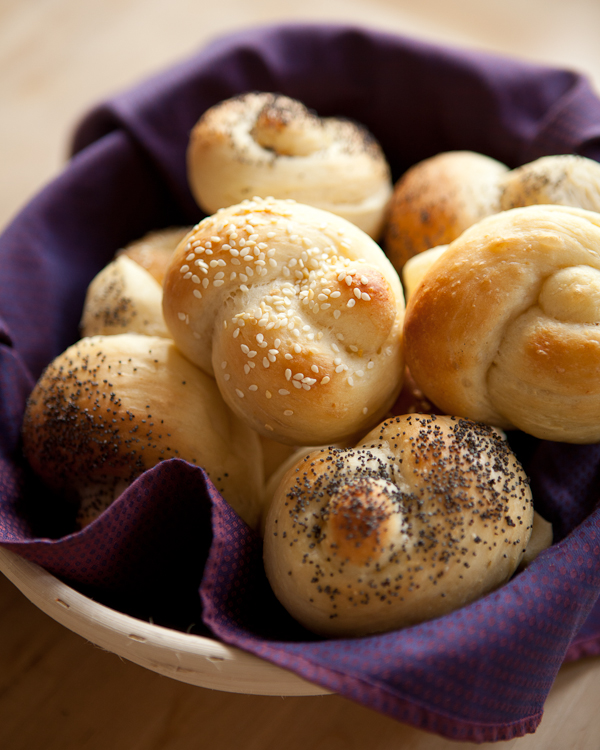 This recipe originated in a cookbook that I have talked about before, a More With Less which is a Mennonite cookbook that came out in the early 80s. The reason ingredients come into factor in this story is that this recipe calls for several ingredients that I wouldn’t normally have around: instant potato flakes, powdered milk, and margarine. At some point when I stocking my pantry I picked up all of these things. Which meant that I didn’t have to go outside! Win!

The original recipe for these rolls calls for 17.5 cups of flour. Yeah, that’s a full five pound bag of flour (!) which yields 64 decent sized rolls. Even with a dinner party to go to, that was far too many rolls. I ended up cutting the original recipe in half, with no ill effect ended up with 32. This is still a lot of rolls. Even so my largest bowl was only barely large enough to mix a half recipe. I certainly don’t have a bowl large enough to mix a full batch.

The resulting dough is light and fluffy, and is best eaten within a day or two (which is another good reason to work with smaller batches). You can shape them any way you choose – knots, simple balls, etc. I’ve never tried it but I bet these would make killer hotdog buns if rolled into logs. Hmm, now that I think about it I’m betting they would work well for my White-Castle-At-Home project that I am going to do at some point. The knots are a bit tedious but from a presentation standpoint they are superior to regular round rolls. 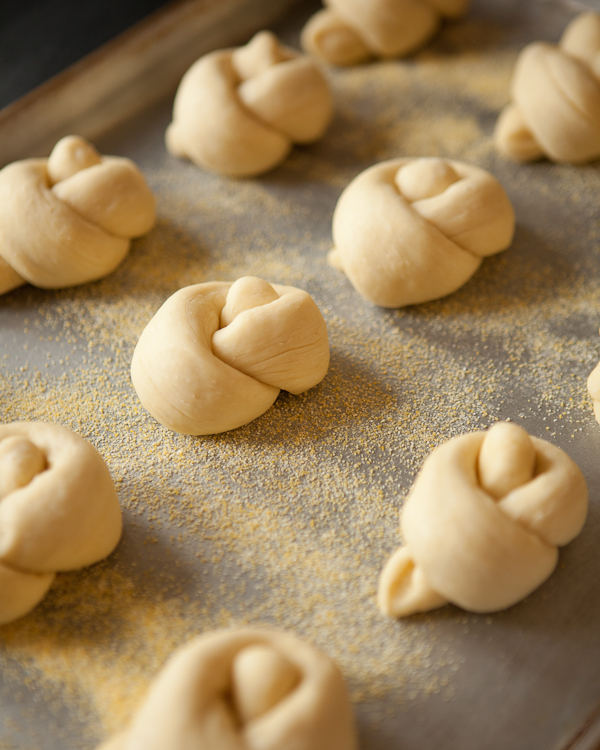 The other brilliant thing about this recipe is that apparently you can use this dough for a whole bunch of things other than rolls. Like cinnamon logs and doughnuts. I have never made anything other than rolls with it, but it seems to be a pretty good base dough – sky is the limit! They are very tasty when topped with sesame seeds, poppy seeds or just plain. I made them all three ways for variety!

This recipe is adapted from the More With Less Cookbook by Doris Janzen Longacre. This recipe is easily doubled. A double batch takes a full five pound bag of flour.

To melted butter and margarine, add
Warm water
1 egg, beaten
Additional water till you have 3.5 cups.

Make a hole in dry ingredients. Pour in the liquid mixture. With a canister of flour nearby, begin to mix in the liquid with a wooden spoon. When too stiff to mix with spoon, begin kneading by hand. If dough becomes sticky, sprinkle with a bit of flour. Scrape down bowl and incorporate all of the flour into the dough. When dough is no longer sticky and has a smooth satiny texture, pour a little oil over dough-ball and spread with hands to cover dough surface. Cover pan with wet towel and let rise 1-2 hours until doubled in size.

Dump the dough out on a lightly floured surface and gently press out the air. Form the dough into one large ball, then divide using a dough scraper: Divide dough into quarters then into quarters again which will yield 32 rolls. Shape into rolls (bowknots, balls, etc.) and place on greased cookie sheets (optionally dusted with cornmeal) to rise for 45 minutes to an hour. After having risen, they may be brushed with egg and water glaze and sprinkled with sesame or poppy seeds. Bake in 400F for 7 minutes on a lower rack and then 7-8 minutes more on a top rack to brown (total oven time around 15 minutes).