I was all excited about my baking yesterday that I woke up extra early. I often have to struggle with my impatience to get started with something (in this case, baking) and my natural inclination to, you know, stay in bed. So I stayed in bed a bit longer and procrastinated by perusing through some of my food reading lists. I came across an article in SFGate about the Green Goddess Salad, which apparently was created by chef Philip Roemer at the Palace Hotel in San Francisco. I flagged it and then got up and went on with my day baking bread.

Wednesday night I had been planning on making a curry chicken for dinner, but then decided that the dish be best served with rice and I had all this bread I’d baked that I wanted to serve instead. Pasta seemed like a good fit, then I remembered that I don’t want to be a bloated pile of carbohydrates and by the way when the hell was the last time I had a salad. Then I remembered the Green Goddess article. 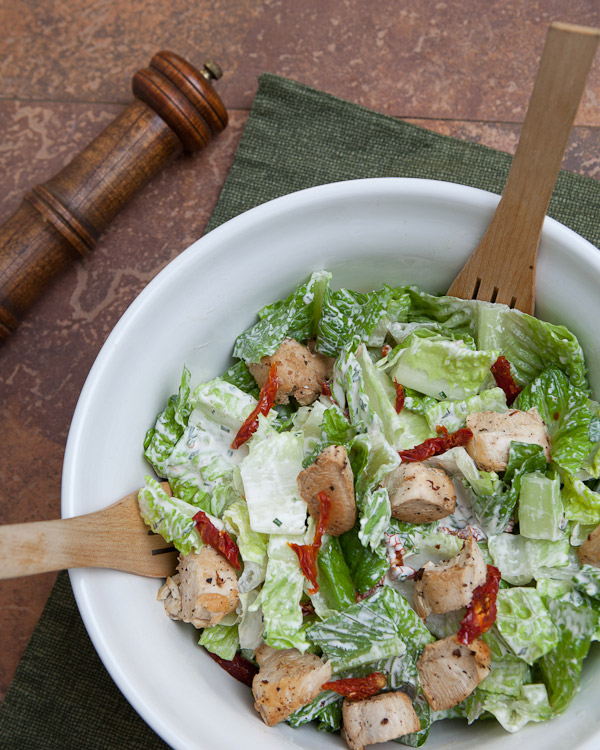 After reviewing the recipe though, I realized that it called for THREE CUPS OF MAYONAISE. Holy crap. While I’m sure that it would be lovely with that much mayo, I wasn’t about to put what amounts to the better part of a large jar of mayo on a salad, it just didn’t seem right. Not to mention that fact that with only two of us for dinner, that’s an awful lot of dressing. So I opted to go with a modified recipe that made a smaller quantity. And since I was a bit slap-dash with my measurements and such I don’t think it qualifies as a real Green Goddess recipe, more of a Wednesday Night Goddess Salad.

For the dressing:
Most of a tin of anchovies, minced
1 green onion
Handful of parsley, minced
Small bunch of taragon, minced
Three or four heaping tablespoons of mayo
1/4 cup of garlic infused vinegar
A handful of chives, minced

For the salad:
One head of romaine lettuce
A couple of cooked chicken breasts, diced.
A half cup of sun dried tomatoes, julienned

It doesn’t get much more simple than this: Mix all of the ingredients of the dressing together in a bowl and chill until ready to use. The original recipe says that you can store it for a week, so I’d be willing to bet that would work with my recipe too. Throw lettuce, chicken and sun-dried tomatoes in a bowl and toss with enough dressing to lightly coat. It’s a very rich dressing so go easy on it. I treated this as an entree salad and served it with my fresh-baked bread. Delicious.

The flavor of the dressing is deep and complex, and the slight bitterness of the romaine works well. Dr. Fiance was commenting on a taste she couldn’t quite put her finger on, and I bet she was referring to the anchovies. When mixed into a dish like this they add a certain somethin’ somethin’ to the flavor without tasting fishy at all. They can be a bit salty however, but since you don’t add any other salt to the recipe it works out well. I added the chicken for protein and the sun-dried tomato for color, but you could just go with the lettuce. The original recipe calls for romaine (as well as chicory and escarole which my local grocery doesn’t carry). In my salad, the flavor was so nice with all of the other elements that the simple cooked chicken was pretty ordinary and could easily have been left out.

I can’t say this salad is particularly healthy, what with the mayo and all, but it does make you feel like you’re being healthy by eating a salad. Enjoy!